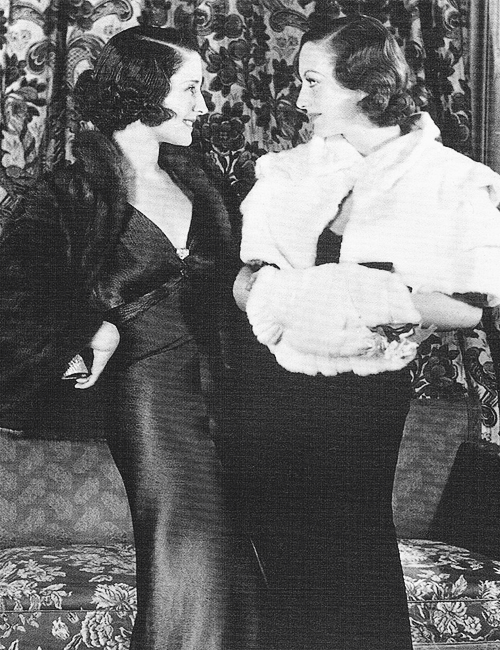 Except that they were most definitely not friends. Joan Crawford considered Norma Shearer as her main rival in Hollywood for leading actress in the 1920’s & 30’s (which I guess means Joan didn’t think of Carole Lombard and Myrna Loy as threats?). Joan loathed Norma with a  passion and allegedly tore Norma down every chance she got both publicly and privately. Norma said she never understood the intensity of Joan’s venom and felt there was plenty of room in Hollywood for both of them. She thought Joan was just whack. And so goes one of the greatest rivalries of the Golden Era. Not sure where Carole fit in during this war but Joan had Barbara Stanwyck and Myrna Loy in her camp and Norma had Bette Davis as an ally. Norma also married one of the owners of the biggest movie studio in town (MGM), which infuriated Joan no end. Joan said: “How can I compete with Norma when she’s sleeping with the boss?” Joan also had an inferiority complex because Norma had won an Oscar in 1930. But Joan persevered and won an Oscar in 1945 for “Mildred Pierce”. Joan’s real name was Lucille and Norma’s real name was Edith – and Norma/Edith was from Montreal.